The Dumfries Botany Group held their pre-season meeting on 10th March. They could not meet again until 26th July. In the meantime we were forced to look more closely at places near home. Some very interesting botanical finds have been made during this period and also once we were able to meet again in small groups and travel restrictions were lifted. Some of the highlights are shown.

It has been a good year for finding Broad-leaved Cottongrass  Eriophorum latifolium and Heath Fragrant-orchid, Gymnadaenia borealis sites.  Several sites have come to light this year for both species. These are declining species in Dumfriesshire as their habitat, hill grazing, is increasingly being lost to the expansion of forestry. New sites were found for Holy Grass, Hierochloe odorata, Rough Horsetail, Equisetum hyemale, Alpine bistort Persicaria vivipara, Alpine Saw-wort, Saussurea alpina, Sheathed Sedge, Carex vaginata, Annual Knawel Scleranthus annuus and  Purple Small-reed, Calamagrostis canescens amongst others. There was a first Dumfriesshire record for Greater Duckweed, Spirodela polyrhiza and Gibbous Duckweed, Lemna gibba. But the highlight proba bly has to be Bog Orchid, Hammarbya paludosa. This turned up unexpectedly as described below. 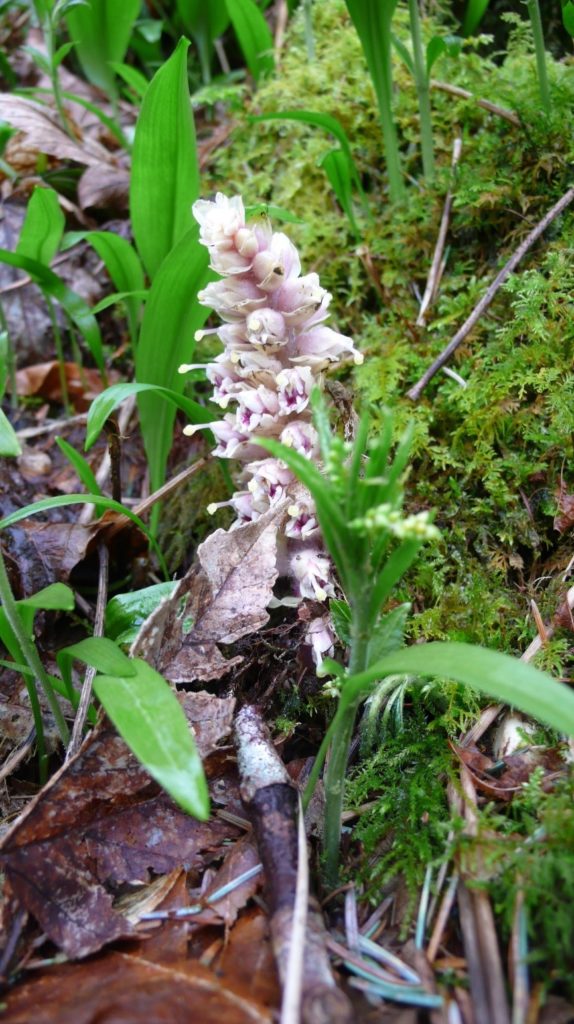 Drew Davidson was first off the mark with Toothwort, Lathraea squammaria on 29th March at Kirkton just north of Lockerbie. You need to find it early before the wild garlic and Dogs mercury cover it over. It is normally found in old woodland, often close the a river though not very frequent. Only a couple of recent records come from Nithsdale where it must be more widespread. 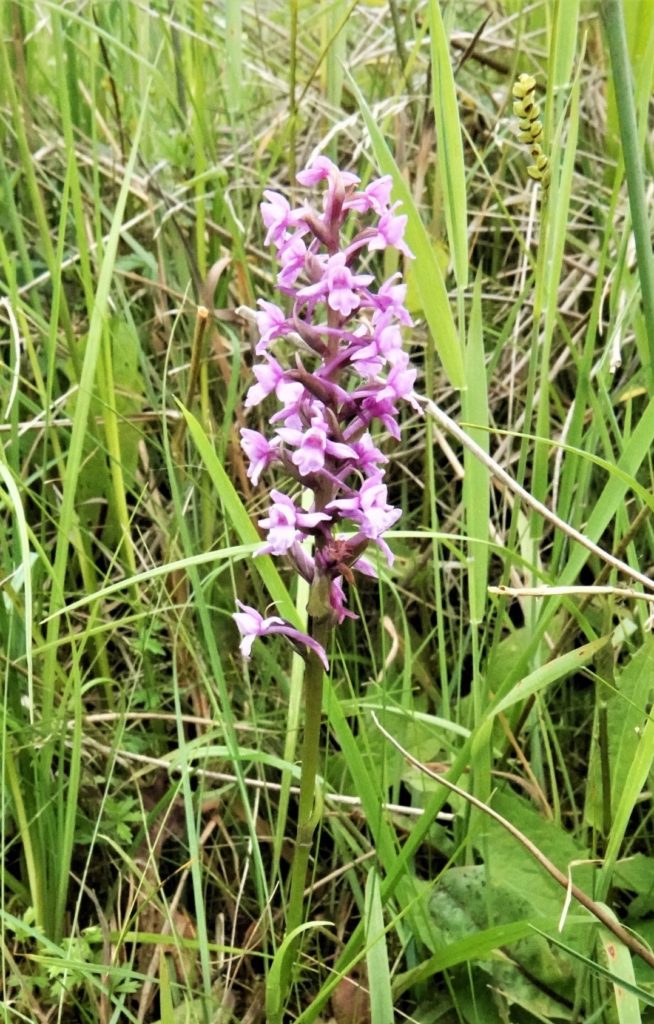 When we were eventually able to drive up to 5 miles for exercise in mid-June we visited Wamphry Glen. There are nice flushes on the hillside there above Laverhay farm and sure enough these had Broad-leaved Cottongrass  Eriophorum latifolium. This grows in calcareous enriched flushes on hillsides and is generally a good indicator of the presence of a nice flush flora. The best flushes with the Eriophorum regularly have Heath Fragrant-orchid, Gymnadenia borealis, and this was present at Wamphry in good numbers.

The specimen here was photographed by Ranald Lamb near Stenhouse Wood at the start of July 2020 in a similar flush and he found it again a week later near Barr Farm by the Shinnel water.

Above Eskdalemuir there remain some of the once extensive moorland pastures now mostly covered in commercial conifer plantations. The White Esk gathers tributaries from this ground and along one of these, the Tomluchar Burn, there are some good botanical records.  I did not necessarily expect to add to these but on the slopes above the burn, hill side flushes had Broad-leaved Cottongrass  and on closer inspection Heath Fragrant-orchid in a new site. A surprise here was to find Alpine bistort Persicaria vivipara in the flushes in small quantity but a really uncommon plant in the South of Scotland. 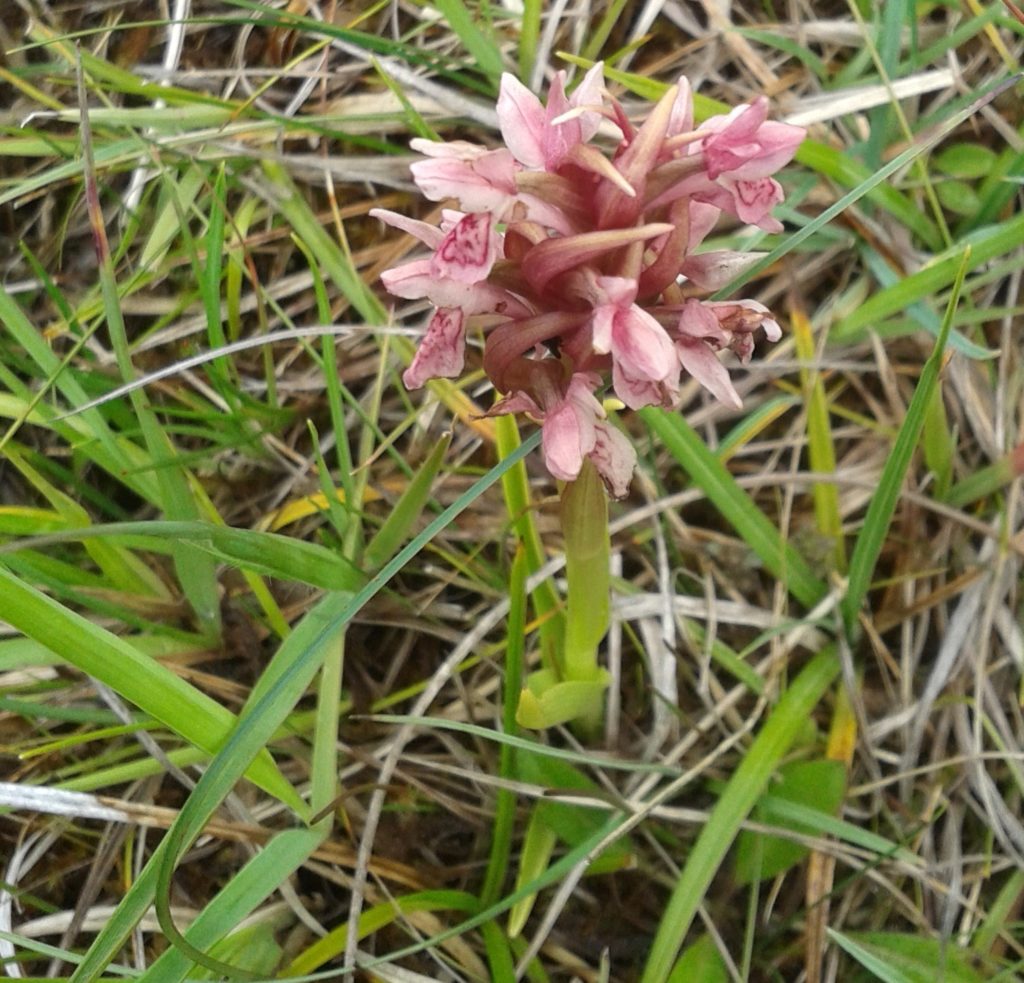 Following the very exciting discovery of Holy Grass, Hierochloe odorata populations along the Black Esk in 2018 it always seemed possible that more populations might exist up or down river. I have searched up river without finding any. At the Kings Pool, where the Black and White Esk join there are a range of interesting plants on the rocks. We saw Northern Bedstraw, Galium boreale, Mountain Everlasting, Antennaria dioica, Kidney Vetch Anthyllis vulneraria, and Stone Bramble Rubus saxatilis, amongst other nice things. Walking down river we found a bright green patch of Holy Grass on a flushed bank, partly within and partly outside a new fenced enclosure with broadleaved tree species planted inside.

Late last summer opposite the Samye-Ling Tibetan Temple in Eskdalemuir we came across a nice flushed bank with a good population of Alpine bistort (see photo above).  We revisited this in Late June to check for other flush flora species. It had a good population of the Broad-leaved Cottongrass. But a new find was a patch of Early Marsh Orchid, Dactylorhiza incarnata. In Dumfriesshire this is rarely found in quantity and only in calcareous flushes and mires as we lack the coastal dune systems that are its other principle habitat. 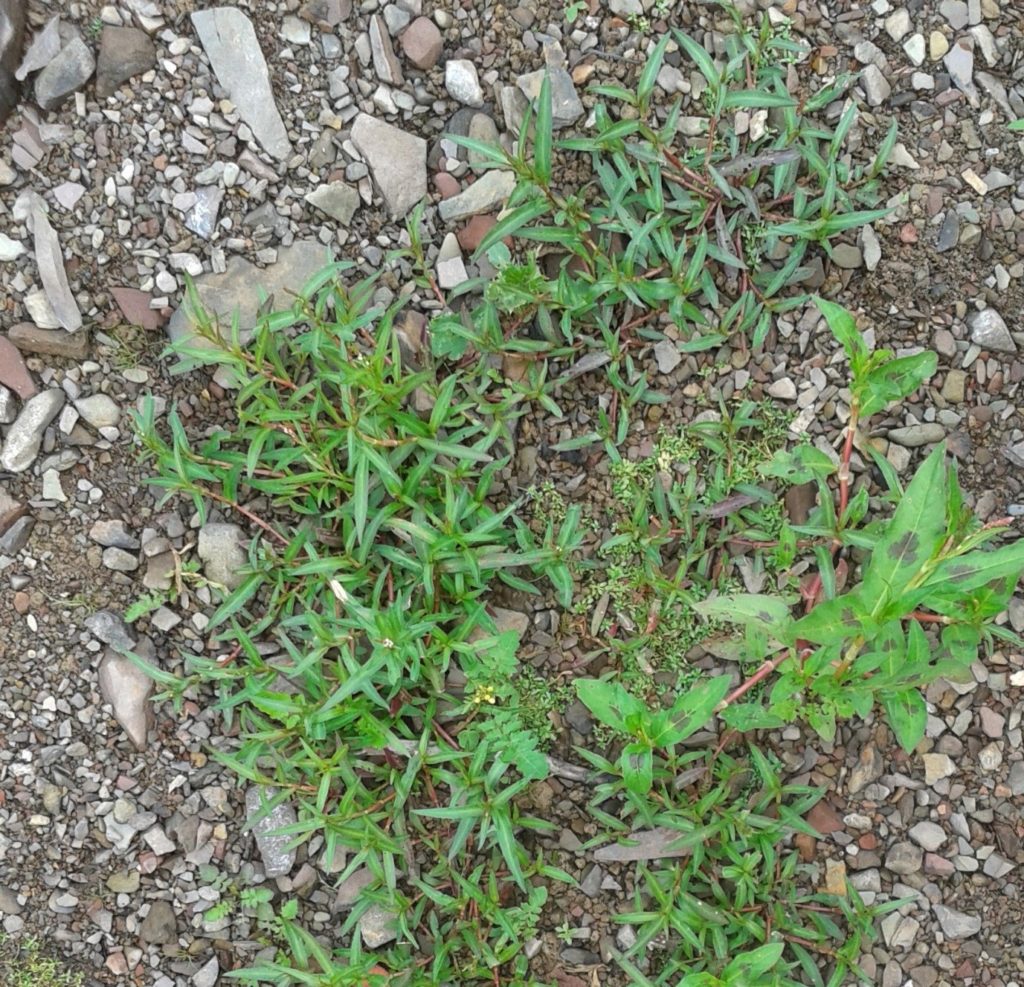 A nice find was made at a site we have visited many times for walking, the Black Esk Reservoir.  After the dry spring the level had dropped alarmingly to nearly 3m below capacity exposing a drawdown zone that is unusual as the reservoir is normally pretty full.  Shoreweed , Littorella uniflora had been recorded previously when the reservoir was being enlarged and was drained for engineering work. This time the find on the exposed mud and gravel was Small Water-pepper Persicaria minor, only the 7th site for it in Dumfriesshire. It looks like a small Common Water-pepper but lacks the tangy leaves and has smaller nutlets. 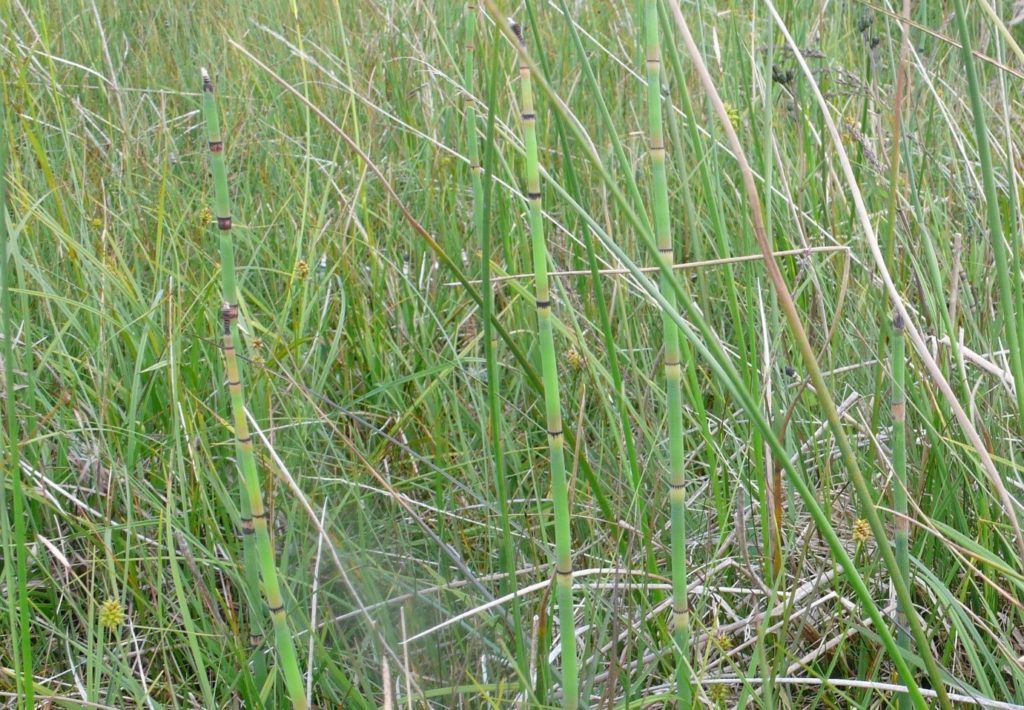 A good find again within walking distance from home was given us by Max Carstairs, an ecological surveyor, who came across a population of Rough Horsetail, Equisetum hymenale. This is only the 6th record ever for Dumfriesshire. It is growing in a very calcareous flush, again with Broad-leaved Cottongrass  Eriophorum latifolium and Heath Fragrant Orchid Gymnadaenia borealis. 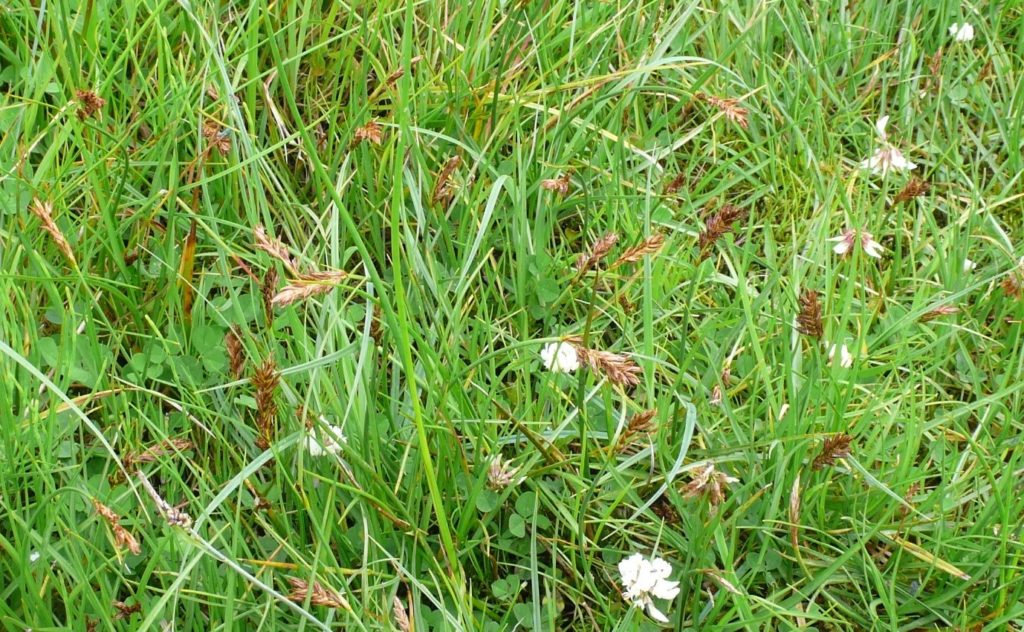 On 9th July we ventured to a valley near Bentpath where we had found Flat-Sedge, Blysmus compressus last year. We wanted to see if it occurred further up the Shiel Burn and we were rewarded with several strong populations. Then in mid-September we explored the nearby Effgill Hope and found more populations of Flat Sedge.  These populations are very close to the plants north western limit in Britain. It is only currently known in Dumfriesshire from these two valleys and the adjoining Stennies Water. 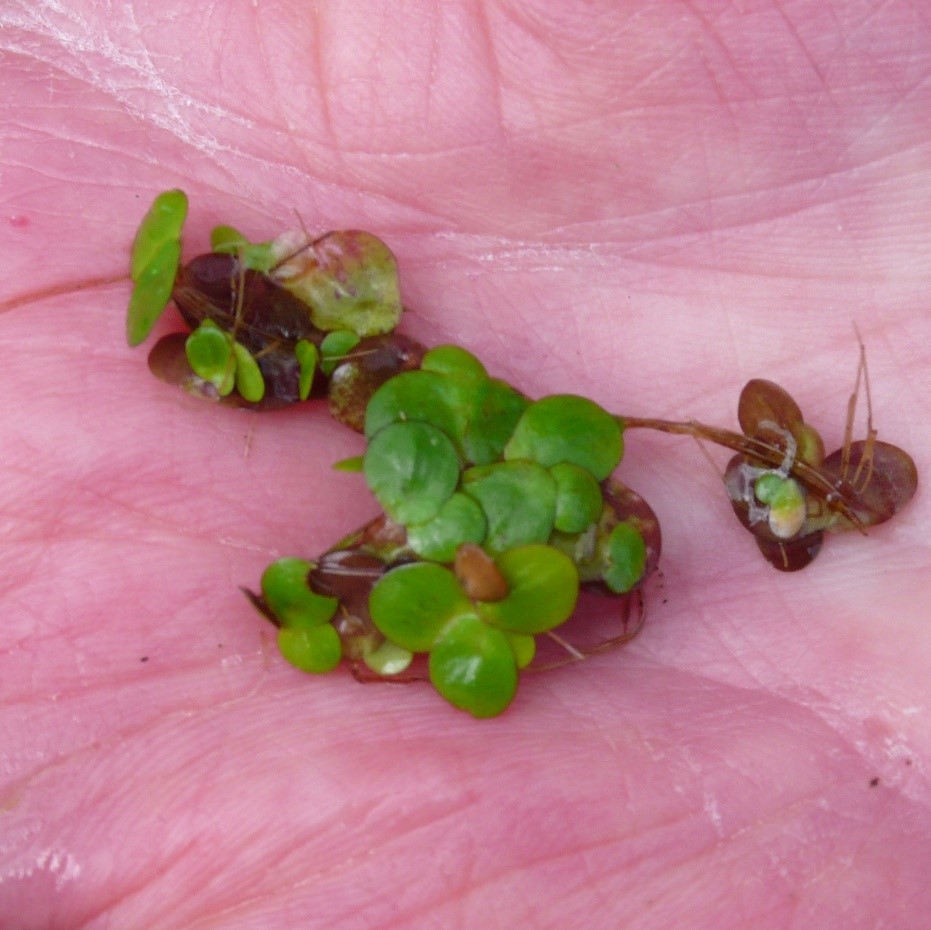 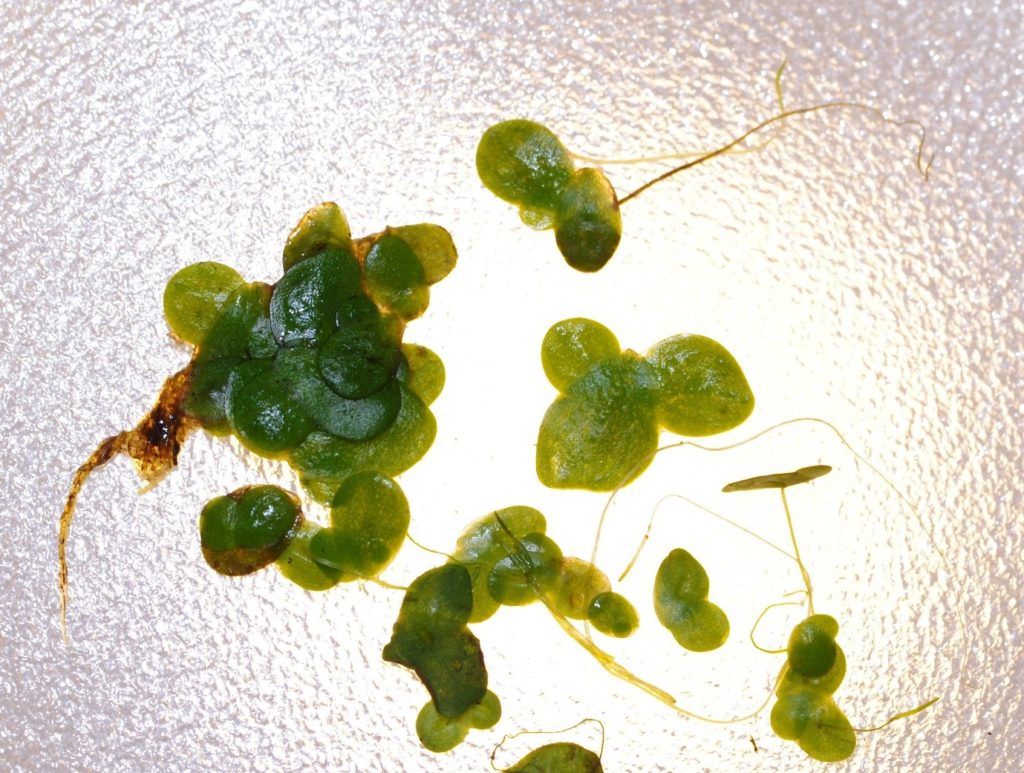 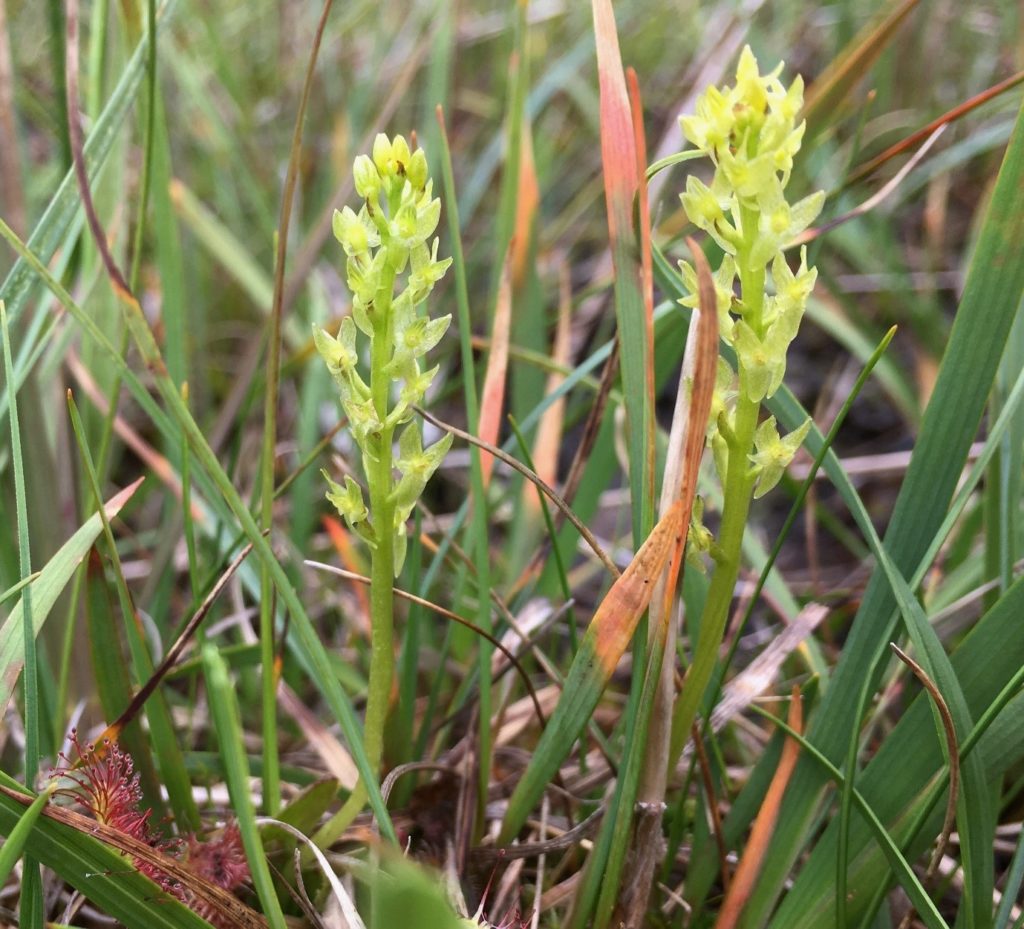 In early July Bob Merritt sent news of a first record for Dumfriesshire. This was Greater Duckweed, Spirodela polyrhiza at Loch Auchecreiff near Dumfries. The photo shows the characteristic red underside to the leaves. This record is a bit of a jump for the species. It is established in the central belt of Scotland and in NE England with one isolated occurrence at Carlisle. Otherwise it only occurs south of the Lake District.

A similar distribution applies to another Duckweed that turned up as a new record for the County at Longbridgemuir in early October. This is Gibbous Duckweed, Lemna gibba. It is more subtely different from the Common Duckweed than Spiordela and so may be overlooked and present in more places. It has leaves that are wider above the middle and air chambers giving it a “warty” look.

From mid-July we were able to travel further for leisure so a small group of us recommenced recording monads as part of attempting to complete recording of monads in the Moffat and Ettrick Hills. This has turned up some very choice records one of which is probably the outstanding botanical find of 2020 for Dumfriesshire. Bog Orchid, Hammarbya paludosa was found in stoney mineral flushes on the flanks of Fauldside Hill on the Ettrick hills side of Moffat Dale. This is a rare species in Southern Scotland and has never been recorded in Moffat Dale before. It is the first time since 1973 it has been recorded in Dumfriesshire.

As well as Bog Orchid recording on the Ettrick side of Moffat Dale has turned up records for species previously found in Selkirkshire by Rod Corner but not before seen on the Dumfriesshire side. These include Alpine Saw-wort, Saussurea alpina and Sheathed Sedge, Carex vaginata. We have also extended the known distribution of both Frog orchid, Coeloglossum viride and Field Gentian, Gentianella campestris in the Selcoth valley. These two species are very scarce or rare in Dumfriesshire. The valley is going to see broadleaved tree planting but fortunately the owners are sympathetic to their landscape and plans have taken due account of these species and they will remain in the area that continues to have light grazing. 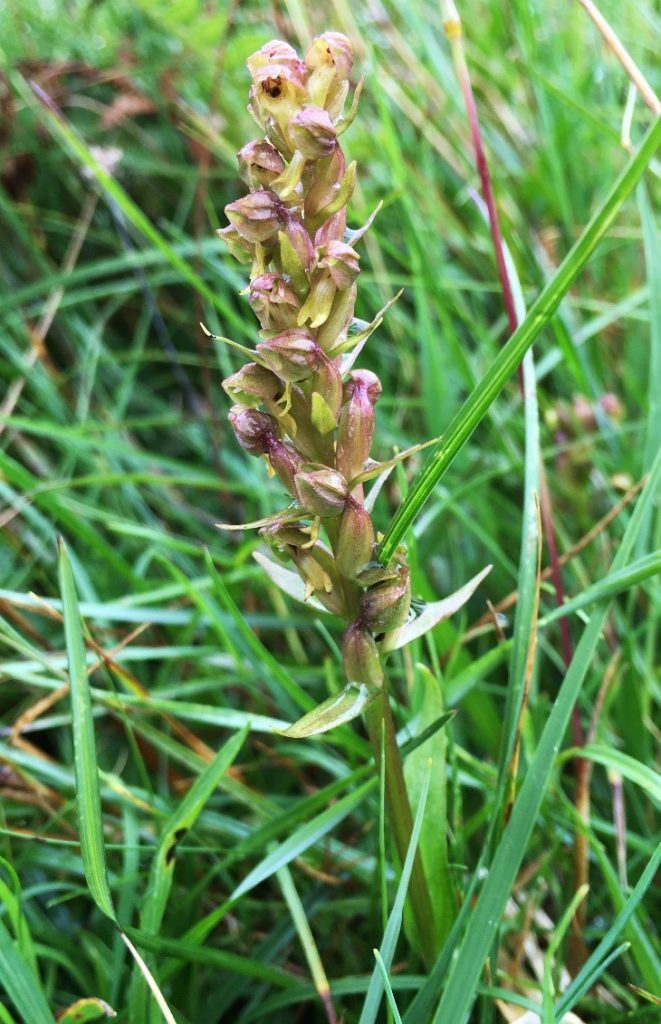 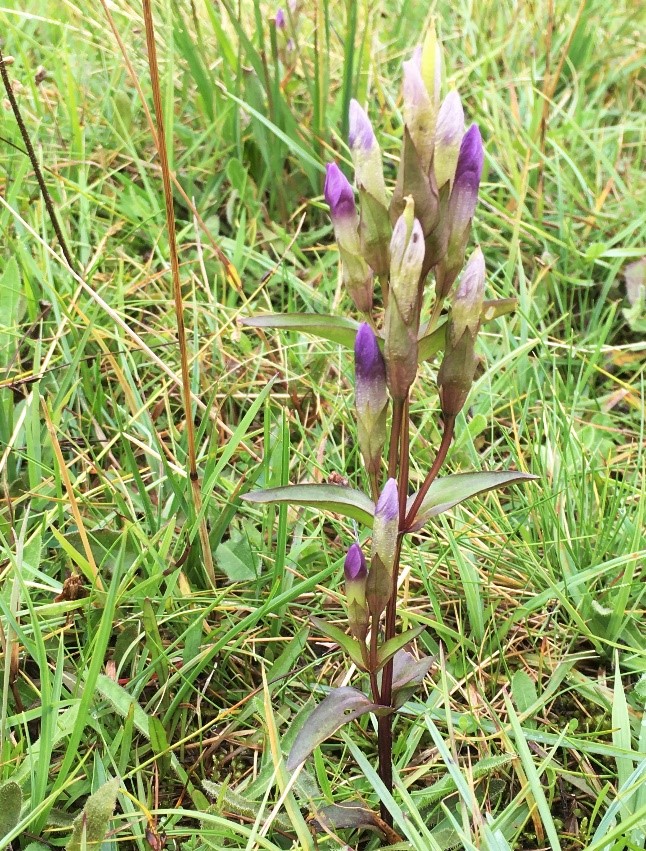 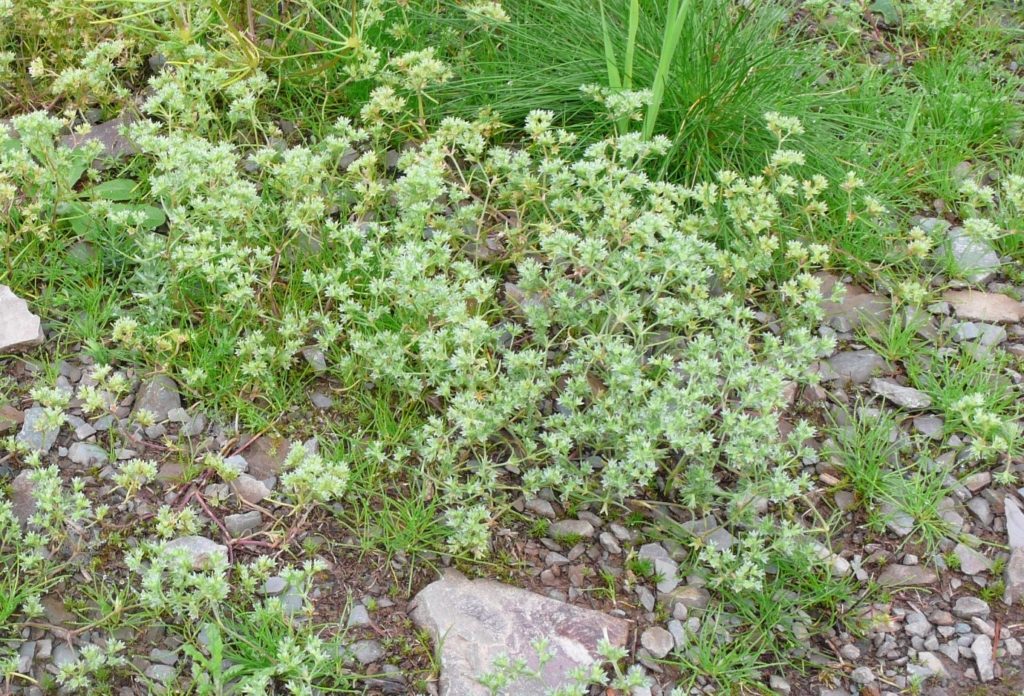 One of the uncommon species that is making use of forestry tracks is Annual Knawel Scleranthus annuus. It is a small and delicate annual dependent on open ground and would have once been commoner on heathy ground though much of that has now disappeared. It was good to find two new colonies for this species this year the sixth and seventh since 2000. 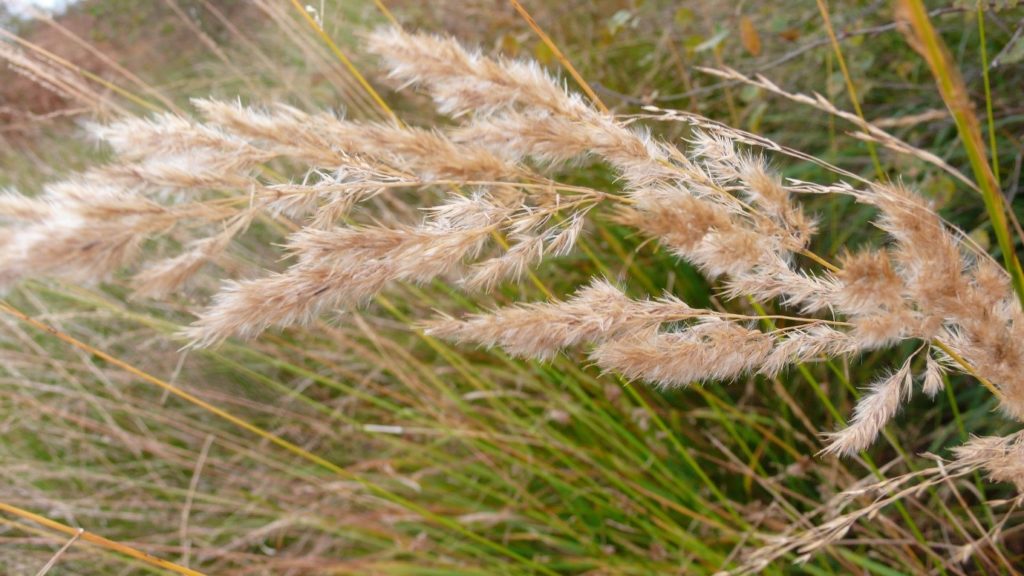 The final noteworthy find was a third Dumfriesshire site for Purple Small-reed, Calamagrostis canescens on the Longbridgemuir SSSI lowland raised bog. This was growing in an area of the bog that had been dammed to stop water loss, the same area where Gibbous Duckweed was found.