A new site for Melampyrum sylvaticum (Small Cow-wheat) in Westerness

A new site for the Nationally Scarce Melampyrum sylvaticum (Small Cow-wheat) has been found beside the River Arkaig in Westerness, only the second recent record. The habitat is described, tips on recognition are given and threats at this site are outlined.

Melampyrum sylvaticum (Small Cow-wheat) is a Nationally Scarce annual which in Britain is almost entirely restricted to northern Scotland, where it is most commonly found in birchwoods. Westerness (vc97) has a large and well-studied population beside Loch Ossian on Corrour Estate. There are old records elsewhere in the vice-county (Glen Roy and Glen Buck) but recent searches have been unsuccessful. So it was very exciting to chance upon a new location this summer on Locheil Estate, beside the River Arkaig.

The new site is on a river terrace in an area of open birchwood (NVC type W11) at NN 177880, a new hectad record.  I counted about 150 plants on 26 June 2020, scattered over an area of 20m x 10m under a canopy of Pteridium aquilinum (Bracken). Here it is mixed with the much commoner Melampyrum pratense (Common Cow-wheat) but is largely separate at a micro-habitat scale. Associates include Lotus corniculatus (Bird’s-foot Trefoil), Prunella vulgaris (Self-heal), Oxalis acetosella (Wood Sorrel) and Hypochaeris radicata (Cat’s-ear).  I suspect that mineral-rich sand and gravel deposited by occasional flooding benefits the M. sylvaticum. A first hectad record for Botrychium lunaria (Moonwort) in the same area was a bonus find.

The small cow-wheat attracts attention because of its bright yellow flowers, compared to the paler yellow of common cow-wheat (though a brighter yellow form does occur). The flower shape is also very different, as illustrated. However it becomes very difficult to spot after flowering, so it is important to search at the right time – I was lucky! Sandy Payne had a similar experience this summer, finding several large populations in the well-botanised Moniack Gorge SSSI near Beauly, where it was previously unknown.

Most of the surrounding area beside the River Arkaig has mature amenity conifers with much Rhododendron ponticum. The estate has a large control programme for rhododendron but unfortunately Gaultheria shallon (Shallon) is taking its place. It is encroaching into this area too, posing a threat to the Small Cow-wheat. 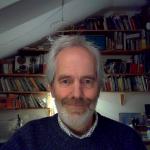