The case of mistaken identification of the rare neophyte Verbascum densiflorum, Dense-flowered Mullein, as the much more common native Verbascum thapsus, Great Mullein, in Fife.

This can happen (well it has to me!), when a common plant turns out not to be that species but another very similar of the same genus? The reason being that only the common one is in the field guides and the description (apparently) fits. The example here is recording of the Great Mullein, Verbascum thapsus, of which there is a large colony on waste ground near me at Guardbridge. Prof. Hamlyn Jones, who often sends me interesting records, sent a record of Verbascum densiflorum, Dense-flowered Mullein, from the same area where several are growing with V. thapsus. This species is not in The Wild Flower Key (2nd ed.), Francis Rose & Claire O’Reilly (2006), Collins Wild Flower Guide (2nd ed.), David Streeter & Christina Hart-Davies (2016) or Wild Flowers of Britain and Ireland (2nd ed.), Marjorie Blamey, Richard Fitter & Alastair Fitter (2013), and so easily thought, from illustration and description, to be V. thapsus.

In the New Flora of the British Isles (4th ed.) Clive Stace (2019), the two are separated at the end of the dichotomous key by stigmas; V. thapsus being capitate and V. densiflorum being spathulate. (See below).

It is only too easy, when two very similar species grow together just to record the first few you see and not realise that there are two. The record of Verbascum densiflorum itself is remarkable as it is a new county recorder for Fife & Kinross, and only the second record in the wild for Scotland.

For the same reason, I think I under record Hirschfeldia incana (Hoary Mustard) as it often grows with Brassica nigra (Black Mustard) the difference here are the seed pods which need to be seen when mature. Building up a knowledge of species which are difficult to separate and the need to look carefully is obviously a good exercise! 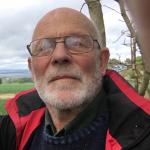